A project team for Dreamtime was established and on the recommendation from the Italian Ministry of Culture, STart S.r.l., a well establish Italian Art Management Company endorsed by the Italian Government to organise major art exhibitions for Italian museums was commissioned to negotiate the framework for Dreamtime with the M.A.N. museum in Nuoro, Italy. STart's representative Dr. Davide Sandrini was the project leader and in charge of organising the exhibition, including providing the exhibition design, producing the exhibition catalogue, establishing and executing a marketing plan and organizing the transport and insurance of the art to Italy. On the Australian side the project was led by Hans Sip and supported by Adam Williams & Maria Sanciolo- Bell, who acted as the Italian-Australian Liaison with solid connections to the Italian Government.

The majority of the art and all of the artefacts were on loan from the Hans Sip collection and a further sixty works were donated by Adam Williams and nine artists. All the donors waived their loan fees to the exhibition.

The exhibits were selected by a team of Italian fine art specialists and the exhibition was co-curated by Maree Clarke, then Senior Curator of the Koori Heritage Trust and Amanda Reynolds curator at the Aboriginal section of the Melbourne Museum. The curatorial framework for the exhibition was defined as following:

The objective of the exhibition was to heighten the profile of Aboriginal artists overseas and to educate the Italian public on the diversity and richness of their art. The artefacts on display illustrated the utensils historically used in daily traditional life as well as weapons employed for hunting game.

The Dreamtime exhibition opened in February 2011 at the M.A.N. (Museo d'Arte Provincia di Nuoro - Modern Art Museum in Sardinia, Italy. A smoking or purification ceremony was performed by Billy Doolan for the occasion. Billy was the main participant in the show with 22 pieces and was the only artist to be at the opening along with Maree Clarke. The business plan included a funding proposal put to the Australian Government for $30000 to enable an additional 8 artists to travel to Italy for the opening. The proposal was declined despite the Italian Government and private sponsors supporting the exhibition with a $750000 budget and the donors to the show waiving all their loan fees which totalled over $160,000.

An exhibition catalogue (high quality print in an Italian edition only) was designed to entice Italian and European art enthusiasts to visit the exhibition and give a deeper insight and understanding of Australian Indigenous art and culture.

Dreamtime closed in August 2011after a 6 months run attended by 25000 visitors. In addition 2000 school children visited the museum as part of a programme run by the MAN Museum to teach them elements of Aboriginal art and culture. 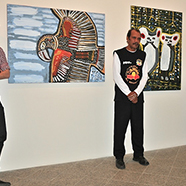 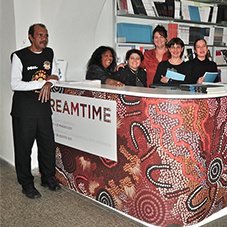 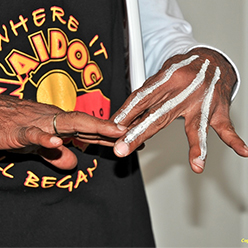 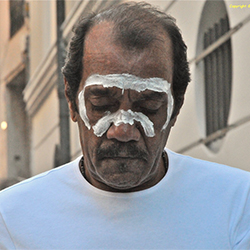