A residency was offered to Billy following talks held between Professor Lindy Joubert of Melbourne University, Professor Samuel Leong of the Hong Kong Institute of Education and Gary Chan, Special Projects Manager for Aboriginal Exhibitions Pty Ltd. Its main objective is the production of nine paintings through which the artist will express his impressions of Hong Kong by converging Aboriginal and Chinese culture. Billy has Chinese heritage through his great grandfather who arrived in North Queensland in the late nineteenth century to start a new life in Australia.

The works will be used as the basis of a run of eighty eight limited edition prints of each which are to be the size of the originals and printed on linen. They will be released exclusively in Hong Kong. An exhibition of all the works is to be opened in Hong Kong towards the end of 2014

Billy has a number of school engagement during his Hong Kong stay and through them he will teach pupils his art techniques and how his culture is inseparable from his art. His first two works in the Hong Kong series have been completed and revealed much to the delight of his host, Professor Leong. The works reveal a deep and sensitive connection to Hong Kong and it may be argued that Billy has always been influenced art by his Chinese heritage particularly through his depiction of brolgas which are totemic to him.

Other engagements include meetings with senior academics at the HKIED and various activities associated with UNESCO Art Week where he is a guest.

The residency is unique in both its objectives and its scope and a great honor for Billy. The program will be ongoing with further activities planned for 2015 and likely beyond.

Billy has been requested by the directors of the Mount Etna Association to provide his personal statement of what Mr Etna means to him in support of their bid for the World Heritage Listing of Etna with UNESCO. They feel that his statement will add considerable weight to their submission and Billy has agreed that the image of his painting of Mt Etna may also be used in the proposal. It really does indicate the esteem in whi [truncated: read more]

In response to the request for use of the image of Billy's painting of Mt Etna for the World Heritage Listing bid Billy gave Maria Sanciollo - Bell permission to produce a single full scale print of the work which she presented to the Director of the Mount Etna Association. The print together with Billy's letter went in to UNESCO in the final submission by the Association in March 2013. The final submission was the culmination of over three and a half year's work and proposals from the Association sent to UNESCO to support their bid.
UNESCO made a formal announcement in June 2013 that World Heritage Listing of Mt Etna had been granted. 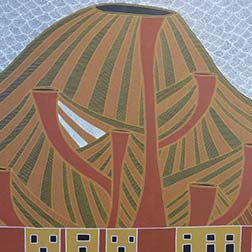 'Make do' works for Doo in life and art

PALM ISLAND is not a place many Australians aspire to call home, but artist Billy Doolan longs to return to the troubled settlement off Townsville where he was born.

"We have this thing with this land. It's true what people say about how close we are to this place""" says Doolan, known as Billy Doo.

Restlessly travelling, he carries with him his dreaming of Gubbal, the carpet snake that created Palm Island, through his herringbone and crosshatch paintings.