Billy has been requested by the directors of the Mount Etna Association to provide his personal statement of what Mr Etna means to him in support of their bid for the World Heritage Listing of Etna with UNESCO. They feel that his statement will add considerable weight to their submission and Billy has agreed that the image of his painting of Mt Etna may also be used in the proposal. It really does indicate the esteem in which he is held in Sicily that he be given this high honor. 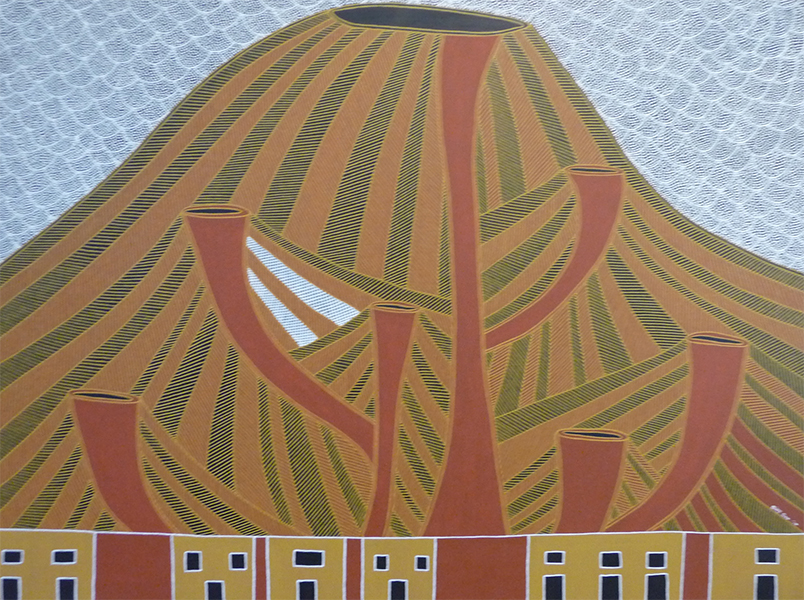 My first trip overseas ever and at an age where this kind of thing happens is something very special for anyone. Scary, but exciting (heh heh!) being invited by Maria Sanciola Bell, a wonderful Sicilian lady I met in Melbourne through my art agent Hans Sip (collector - Aboriginal Art). Maria invited me on a three and a half week tour - an all-round trip from the country to the capitals, "a journey that has marked me for life".

I was then asked by Maria if I would like to paint some of the places I was shown. I marvelled at the Catacombs of Siracusa, magical Lake Pergusa, beautiful (similar to home) Papyrus plants, the incredible cliff-faced caves and the most wondrous story about the native finch to Sicily that was known to try and remove the crown of thorns from the head of Jesus while on the cross. Magical stories! .. And Maria's close friend, also a tour guide, would take me to the last place of all which was Mt Etna.

I couldn't wait! (heh heh!) and being told that Etna was still active, and the largest volcano in Europe and 3,350 meters above sea level. A truly dominating feature of Sicily, I noticed that one could practically see Etna from nearly, or just about, every point around Sicily. "Quite an Impressive sight, a beautiful Mountain" and when I looked around from the top of Etna I could visualise what this volcano created over thousands of years - created this rich volcanic soil, so green. Yet I see a young land, still growing, Etna is not finished giving birth.

To this island, "mother earth, still creating, still birthing"! and I can see this mountain, this volcano that came from the sea, this spiritually enlightening mountain, I see Sicily and when I see Sicily, I see my Mt Etna. You see, Sicily is Mt Etna, and Mt Etna is Sicily!


Ps. I truly fell in love with Sicily, a true magical place,
And Etna never forgotten
And to the life-long friends
I now have in Sicily, Italy!
See you soon Etna
Ciou! Yo!